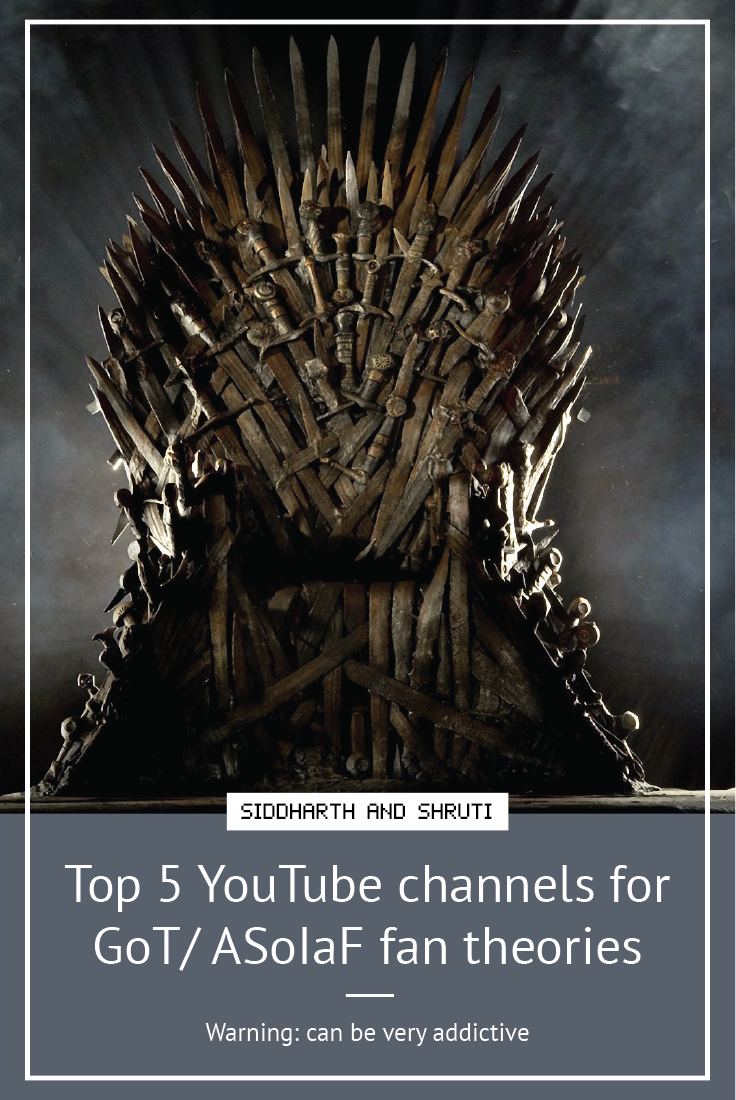 A Song of Ice and Fire (ASoIaF) is a series of high fantasy novels written by American author George R. R. Martin. The series serves as the basis of HBO’s wildly popular television series Game of Thrones (GoT).

For some background, A Song of Ice and Fire is intended to be a series of 7 novels of which 5 have been published over the last 20 years with the 6th installment currently in the works (as of March 2016). Meanwhile, 5 seasons of the TV show have been aired with season 6 expected to debut on 24th April, 2016.

As the story is unfinished, there are numerous fan theories concerning the fate of major characters in the series and also the nature of the world in which the novels are set.

Alt Shift X is well-known for the simplicity and clarity of his presentation style. His explanations are well-supported by quotes from the books and the TV show. As a sample, check out his video on the mystery of The Others (or White Walkers) below.

Note: Alt Shift X has gone full time on his YouTube channel since December 2015 and a result, the frequency of videos on the channel has greatly improved. We would highly recommend subscribing to his channel to keep up to date on the latest videos.

Preston Jacobs is a YouTube vlogger who makes extremely detailed fan theory videos. Many of them are in multiple parts and occasionally quite long. For an introduction, we suggest his video on the ‘Red Door’ theory concerning Daenerys Targaryen’s memories of her early childhood.

Some of his videos are incredibly well-researched; almost like theses on their respective subjects! If you like the one above and are interested in more, you should check out his theories on the Genetics of Dragons and the Faceless Men.

Emergency Awesome is a very popular YouTube vlogger who covers a large number of TV shows, movies and pop culture. He posts a new Game of Thrones related video every Sunday and also regularly hosts giveaways. He’s always very enthusiastic and his feed is updated regularly.

His channel focuses more on the TV show rather than the novels. Nevertheless, his fan theory videos are still quite good. We would recommend watching the one on Valyrian steel swords as an example.

SmokeScreen is another YouTube vlogger whose channel features videos about GoT/ASoIaF. In addition, he also does videos on The Walking Dead and Star Wars in addition to the occasional movie review.

Check out his video explaining an alternative to the widely believed ‘R+L=J’ theory.

Note: Some of his videos contain occasional swearing so treat them as NSFW.

Factomundo is a little known YouTube vlogger who does surprisingly in-depth ASoIaF fan theories. Her style of presentation is quite similar to Alt Shift X but she covers some topics which the latter has not yet covered (Maggy the Frog and The Pink Letter among others). In particular, her theory on Ice Dragons and the seasons in the World of Ice and Fire is really impressive.

Note: The audio in her videos is quite low so it may be necessary to use headphones in order to hear clearly. Also, she doesn’t post videos very often so the content on her channel is a bit limited. Still worth checking out though.

Let us know in the comments what you think of these channels or if you have any other recommendations for fan theories related to GoT/ASoIaF.