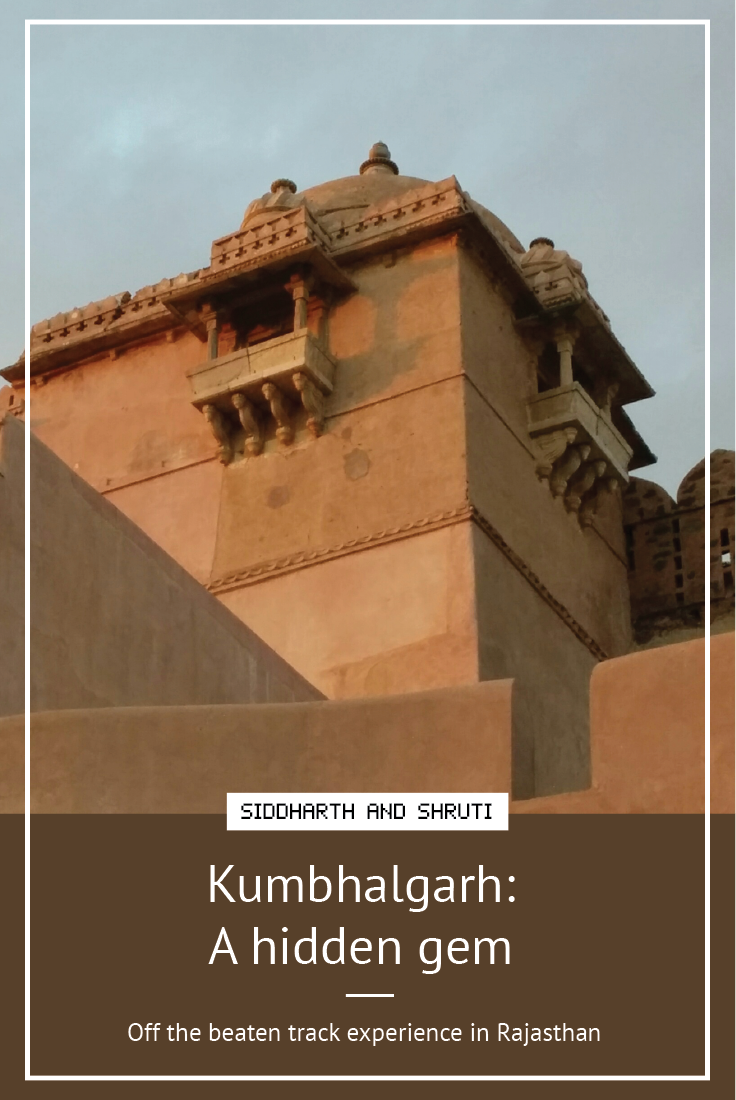 Sunkissed Kumbhalgarh is one of the lesser explored forts in majestic Rajasthan. When we reached here, we didn’t have a lot of expectations given that usually its the palaces of Udaipur and Jaipur getting all the praise. But Kumbhalgarh pleasantly surprised us. Lesser tourists, rich history and beautiful rustic architecture did not fail to impress.

The journey to the fort is through winding roads across small quaint villages. Built on a hilltop, 3,600 ft above sea level on the Aravalli range, it has perimeter walls that extend 36 km. Kumbhalgarh claims to be the second longest wall in the world after the Great Wall of China. These walls enclose palaces, gardens, temples, wells and cannons.

Keep in mind that you will need 1.5-2 hours to explore this huge fort. But avoid reaching here in the middle of the afternoon or risk getting sunburned even in winter. We suggest either 4pm like us or early in the morning maybe around 9. 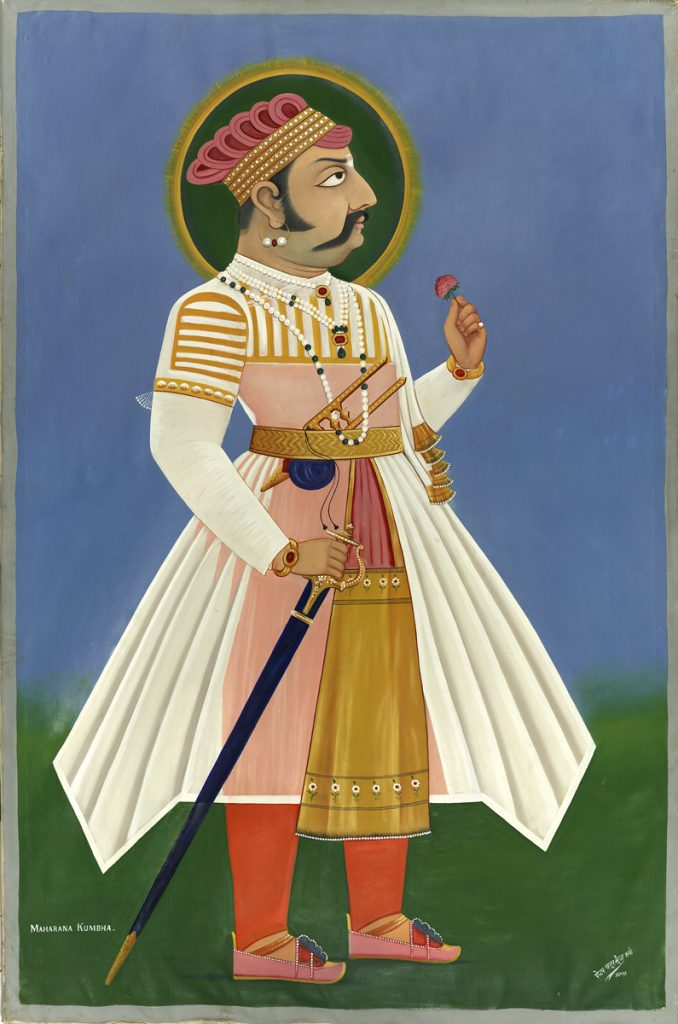 Rana Kumbha constructed the fort of Kumbhalgarh in the 15th Century. Under the rule of the king Rana Kumbha, the kingdom of Mewar stretched right from Ranthambore to Gwalior. Kumbhalgarh Fort was one of the very few forts in history, which never got conquered. One of the most important reasons stated for it is the aggressive or the hostile landscape of the fort. It was only taken once in its entire history. Even then, it took the combined armies of Amber, Marwar and Mughal emperor Akbar to breach its strong defences, and they only managed to hang on to it for two days.

It has seven huge gates called ‘Pol’s. There’s Aret Pol followed by Halla Pol, Hanuman Pol, Ram Pol and Vijay Pol. Entrance to the fort is through Ram Pol. You can buy the tickets here. 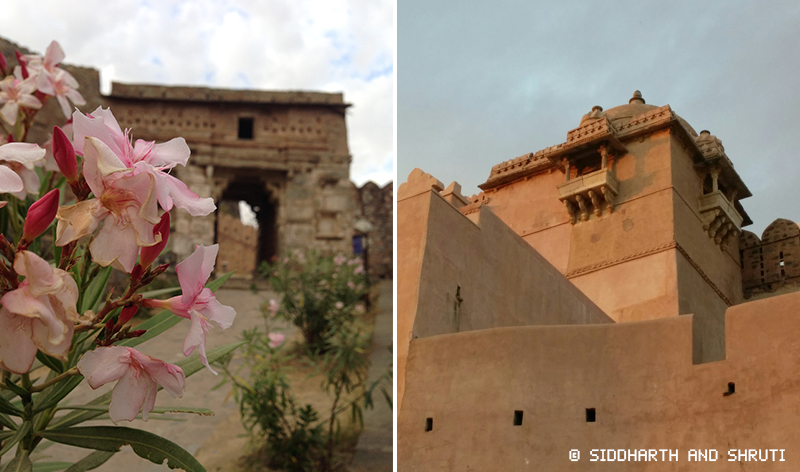 The mansion known as Jhalia-ka-Malia or the Palace of Queen Jhali situated near Pagda Pol is believed to be the place where Maharana Pratap was born. It is made of rubble stone with simple walls and flat roof. Traces of painting can still be seen on the walls. 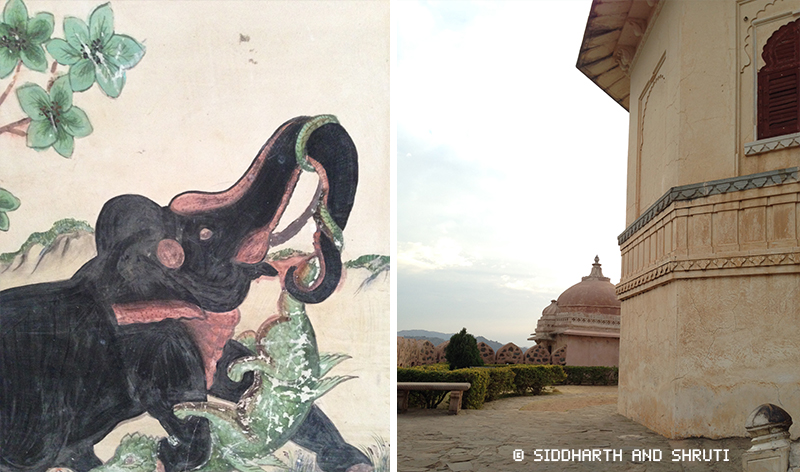 Badal Mahal (Palace) is situated at the highest point of the fort. The view from the top is quite stunning. If you have the time, well worth the climb. The Palace is divided into 2 interconnected but distinct portions – the Zanana Mahal(the section for the royal ladies) and the Mardana Mahal ( the section for the male members of the royal family). The stone lattice screens in Zanana mahal was facilitated the queens to see the court proceedings and other events in privacy.

[bctt tweet=”Tired of Jaipur and Udaipur? Want to visit a lesser known fort in Rajasthan?”] 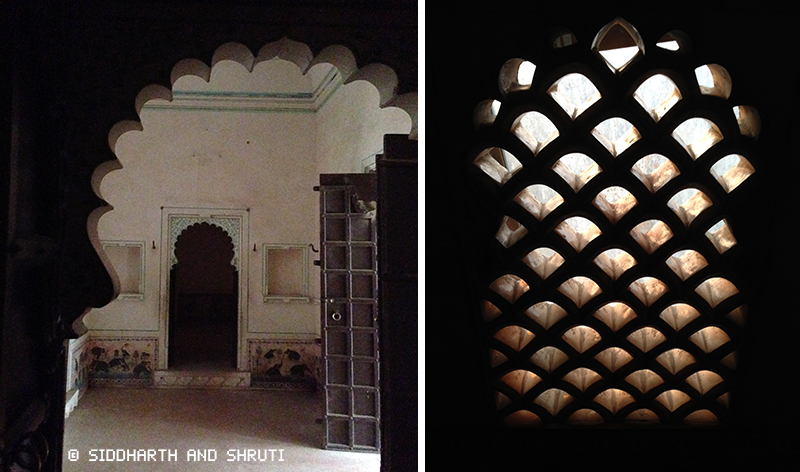 According to legend, in 1443 CE, the Maharana of Kumbhalgarh, Rana Kumbha, was initially repeatedly unsuccessful in attempts to build the fort wall. A spiritual preceptor was consulted about the construction problems and advised the ruler that a voluntary human sacrifice would solve whatever was causing the impediment. The spiritual advisor advised building a temple where the head should fall and building the wall and the fort where the rest of his body lay. He himself volunteered and was ritually decapitated. Today the main gate of the fortress, Hanuman Pol, contains a shrine and a temple to commemorate the great sacrifice. 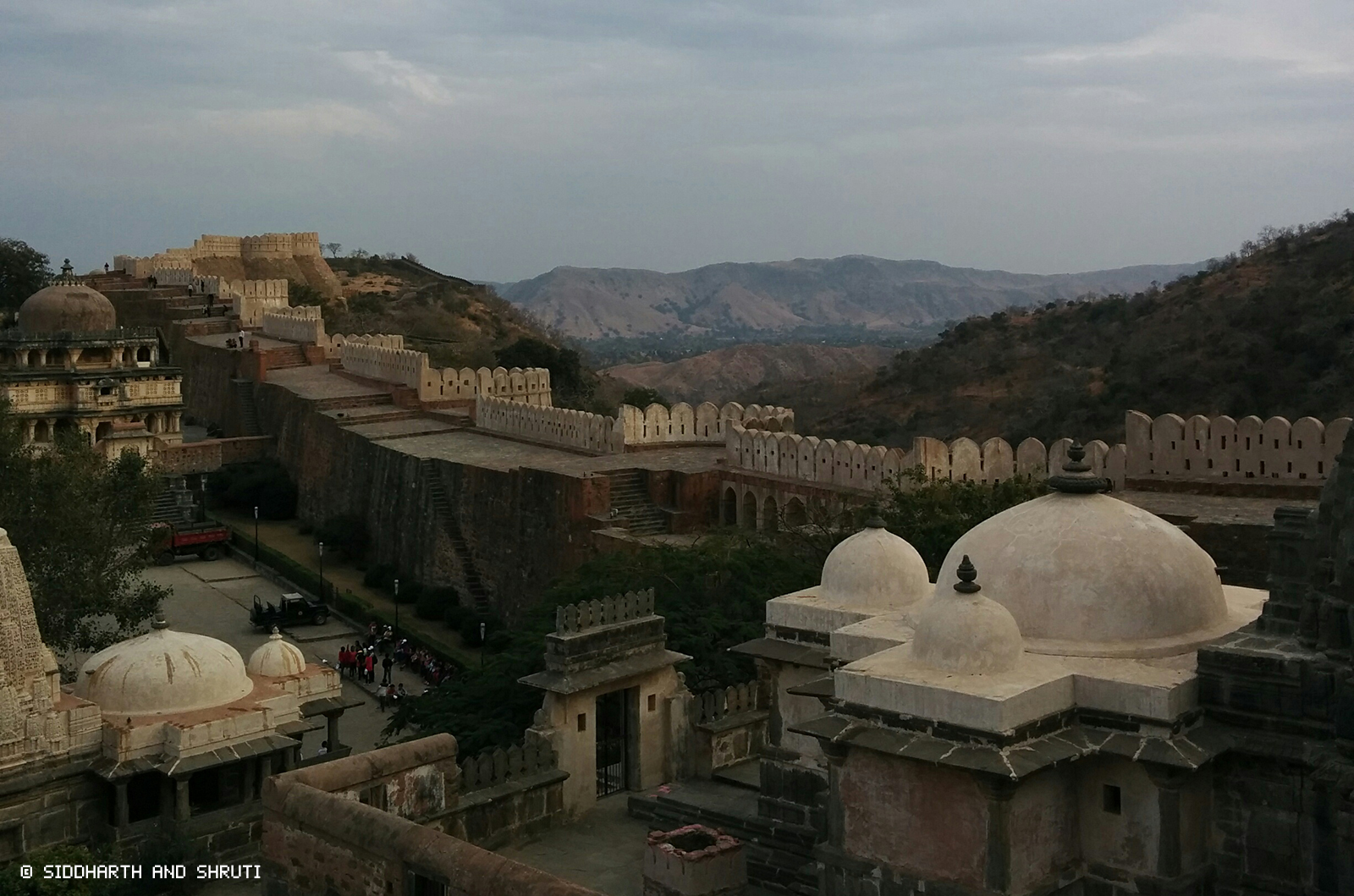 It contains around 360 temples. Some of the temples are Hindu, the others were built for the followers of Jainism. Currently only a few of major temples are in good condition. The Bawan Dewri temple is a famous Jain shrine. It’s name is derived from bawan (fifty-two) shrines in a single area. Of these, two shrines are big in size, the remaining fifty shrines are small in size and arranged all around the outer wall.  An image of Jain tirthankara is carved as the lalatabimba on its sanctum door.

There are Vedi, Neelkanth Mahadev, Ganesh, Parshvanath, Pitalia Dev, Mamadeo temples that you can visit for beautiful architectural columns and shrines. The Vedi temple was built by Rana Kumbha in AD 1457 for performing rituals after completion of the fort. The building is double storeyed and erected on a high platform.It is octagonal on plan with thirty-six pillars supporting the domical ceiling. A triple shrined temple dedicated to goddesses is located to the east of this temple. 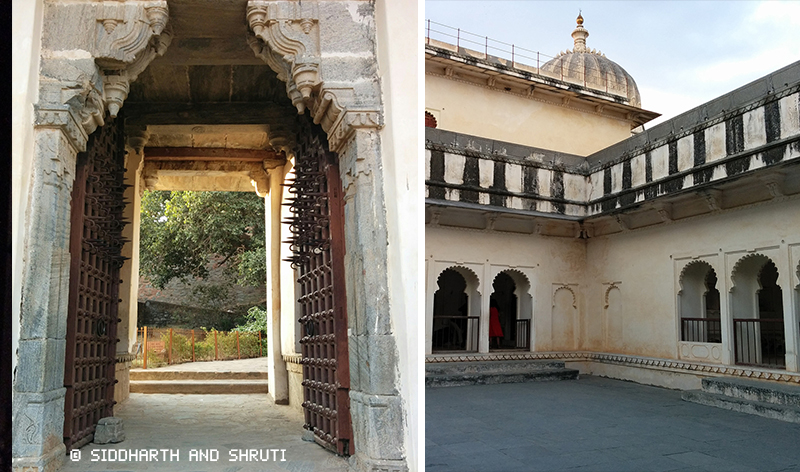 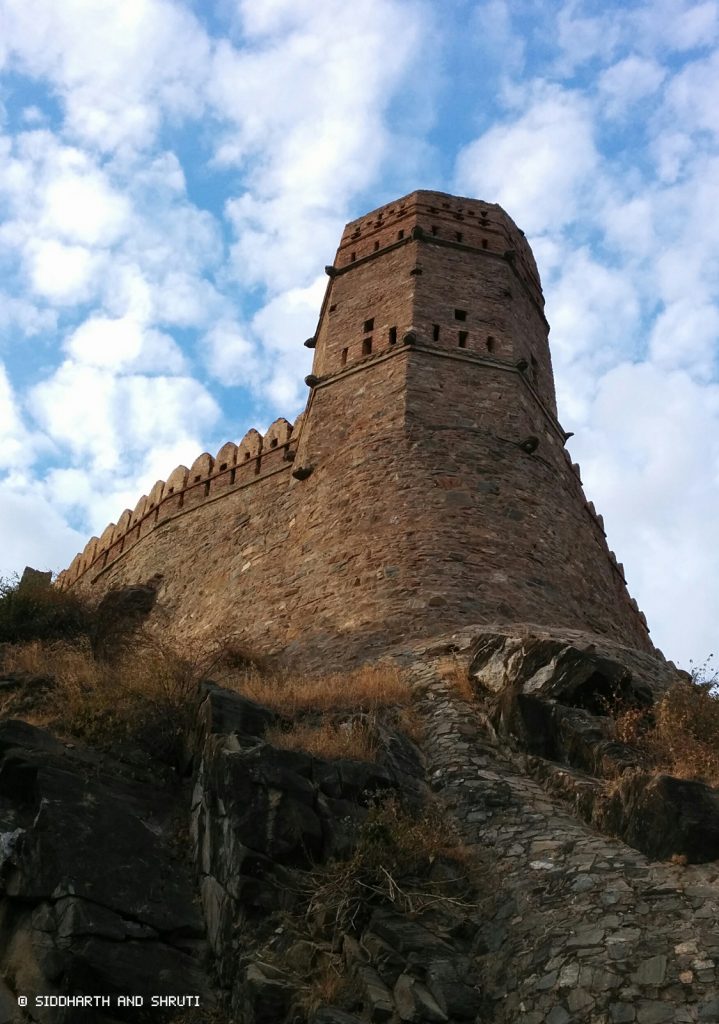 Entry Fee for Indians is ₹10 and Non Indians is ₹100. Visiting hours are from 9 am to 6pm. Since it takes a good 2 hours to explore, we recommend reaching latest at 4pm. You can stay on for the light and sound show at 6.30 pm if you want to know more about the story of how Kumbhalgarh was built. We found it a bit too dramatic for our taste. The light and sound show is only in Hindi.

Around Kumbhalgarh: The large and rugged Kumbhalgarh Wildlife Sanctuary can be also visited from Kumbhalgarh. It is home to a very large variety of wild life, some of which are highly endangered species. The wild life includes wolf, leopards, sloth bear, hyena, jackal, jungle cat, sambhar, nilgai, chausingha (the four horned antelope), chinkara and hare.